Nature explorer and musician Land Of Trees unveils the video for ‘See The Fire Dancing’ via Land Of Trees Music. The zestful musician first used poetry to express his love for nature, afterwards this love was put into his music.

The video begins with a shot of the scattered lighting of the Varberg Theater, which twinkles like fireflies and stars in a cloudless night sky. The dimed back area of the theatre, together with the lighted stage, give the video a futuristic quality that is akin to a spaceship that can only be found billions of years into the future. The thought that comes to mind is how connected and similar the future is to the present and also how the past is connected to the future because fire and light shine bright in all civilisations and will most likely shine in the same manner for future generations.

Land Of Trees discusses the chosen venue for the video: “For most of the band it was the first time seeing Varberg Theater in all of its glory. It’s a well-preserved old theatre with a lot of soul. After setting everything up with lights, cameras and microphones, it was just a matter of actually recording the live session”.

Authentic Indie-Folk singer-songwriter Land Of Trees released his brand new single ‘See The Fire Dancing’ via Land Of Trees Music on the 21st of October. The eclectic musician’s love of nature is one of the principal catalysts for his musical creativity, resulting in music that is permeated with anecdotes of life outdoors and a curious hommage to the environment.

The lyricism in the single is a gentle consolation that speaks directly to the often hidden places in our hearts, promoting freedom and self-acceptance. Words in the song such as the following: “finding comfort in your smile” and “thankful for these days” are those that every human being needs to hear every day because they remind us that we are not alone in the world and that there is goodness in the world, one has just to be awake to and aware of the small good times.

Land Of Trees relays the moment ‘See The Fire Dancing’ was composed: “I wrote it on my banjo, which was peculiar enough to begin with, but when I played it to the band they were all mesmerised in their own way. It was an easy choice as our first single release for the upcoming album and I’ve never seen the band more intrigued to record a song”. 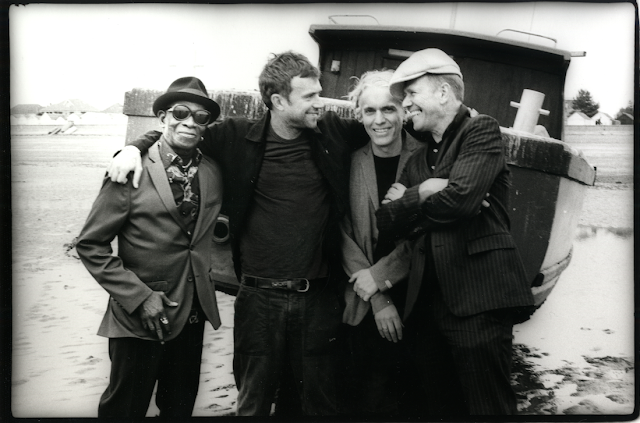 The Good, The Bad & The Queen have dropped a brand new track and chillingly-accompanying video for the latest single titled ‘Gun To The Head’ taken from the band’s forthcoming studio album Merrie Land. In preparation for their shows in Blackpool, Glasgow and London the band will play 3 intimate warm-up shows in Tynemouth, at the Tynemouth CIU Club on 26thNovember and Cullercoats Crescent Club on 27th & 28th November – each with a rare capacity of less than 100. Tickets go on sale at 9.00am this Wednesday. Ticket information HERE!

Watch the official video for “Gun To The Head” by The Good, The Bad & The Queen below –

The latest album, Merrie Land’s focus moves beyond GBQ’s London-themed first album to a wider land, with a beautiful and hopeful paean to the Britain of today, an inclusive Britain, currently in an Anglo-Saxostentialist crises at the end of a relationship, wondering what might be salvaged. Could there be a more perfect band – with their creative symbiosis of pasts and present and shared acclaimed music histories – to reflect on the anticipation, disorientation and confusion of current life.