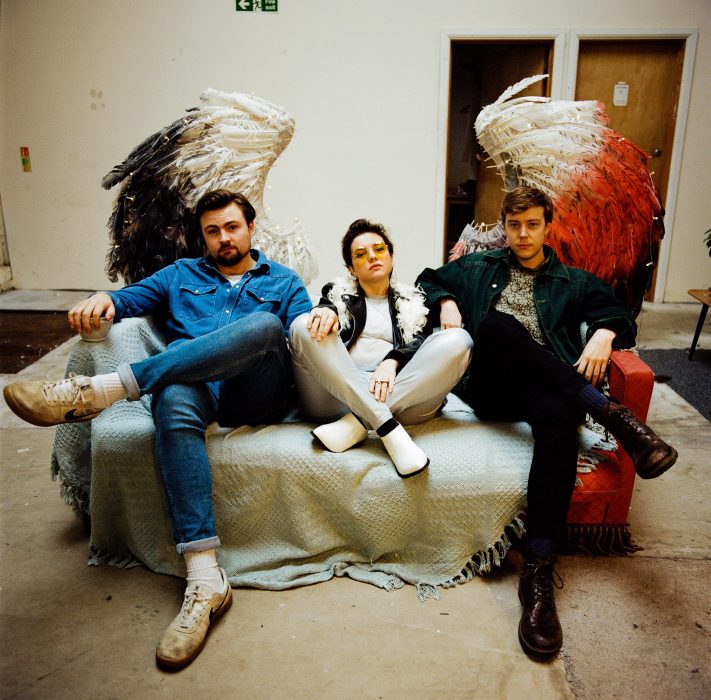 Goldrain are Barbara Dudek, Harrison Moore and Owen Smalley, the fresh future-soul duo out of London formed in March 2019. Having studied together at the London College of Creative Media, the three creative minds banded together and have recently made a trip to Impression Recordings in Berlin to record the six songs that make up their forthcoming EP Mysteries.

Their latest single, ‘Atlantis’, is available for streaming over at The AU Review ahead of its official release.

Get to know the band better below!

Harry Moore (drummer): Well I was introduced to music as soon as I was born really, so I had no choice but to appreciate it! My earliest appreciation of music had to be from my grandad. He used to sit all day long playing old ragtime tunes on the piano, which has always been one of my fondest memories of him. My dad also played the guitar regularly around the house and in his band, where I would watch him perform in old smoked out pubs in North West England. With music production, my dad used to have this very old digital recording machine which could only record one track at a time. My older brother used it to record his first album, and I drew inspiration from him as he was the first person I saw recording music and really going for that ‘DIY’ production.

How did your latest single, ‘Atlantis’, come together? What feeling were you trying to capture or communicate?

Barbs Dudek (vocals/keys): ‘Atlantis’ came out of many things, like frustration from watching adverts for girls cosmetics, objectifying femininity, and a deeper need to find some answers on my own. What does it really mean to me personally? You know, to be a woman? It’s got so many lights and shades to it. I thought using Atlantis, the mystical land, as a metaphor would be perfect to tell a story about discovering something new within yourself — something not really tangible but very powerful. When it comes down to communicating, my hopes are always for the person listening to jump on the journey with me and reflect on those things later on for themselves. The last verse (“turn the tide”) is encouragement for change and hope for further liberation.

Why did you decide to travel to Berlin to record your upcoming Mysteries EP?

H.M: So, it all came full circle for me in a way. My older brother, who recorded his first album with that old digital recorder, relocated from London to Berlin several years ago and has managed to build his own amazing studio called Impression Recordings in central Berlin. I initially thought it would be a great idea for all of us to go there to record/film a live performance of some of our songs, as the live room in the studio is such an amazing space. Then Barbs thought, ‘why not record our EP there’, so we did! For all of us, I believe it was nice to get away from London for a short period of time to try and be creative elsewhere. As I’m sure you’d understand, being in one space for so long can be draining sometimes — especially creatively, which we’re still required to be in the studio despite having the structure and instrumentation of the songs finalised prior to recording.

Do you have any particularly good memories from these recording sessions you’d be willing to share with us?

Owen Smalley (guitars): There’s a guitar part in one of the songs where we wanted to have the overdrive on my pedal steadily increase over the period of about 2 minutes — and since I had my hands full playing the part, Harry sat down cross-legged at my feet and did the most precise pedal-twiddling I’ve ever seen for those two whole minutes. Barbs, Robbie, and Sam were all in the control room cheering us on which only added to the intimacy. Talk about your pals having your back, or in this case your feet. We also broke a new personal best during our time there by eating pizza every day for 6 days straight.

O.S: Such different kettles of fish, so I wouldn’t be able to say that I actually have a preference. But what I would say is that it’s usually a case of the old adage, “absence makes the heart grow fonder”. Like so many other artists, we haven’t been able to play for people in such a long time — so we’re all craving that pretty intensely at the moment. However, we’re also really raring to get back into the studio as soon as we can to start working on new tunes. We want it all!!

B.D: Music creation is a fairly different process to me, as it comes out with living an experience or a thought and materialising it. Building the body of a song takes very different pains and moulding procedures, while performing happens in the moment and its challenge is to stay vulnerable and authentic to yourself in front of other people. It’s hard not to go and hide under the turtle shell or that belting sound, especially when you sing about some deep stuff and your voice is cracking because it’s still painful (and then you realise that you actually have no place to hide). But that’s also the beauty of connection, and the power which lies in that place is almost sacred.

As an artist, it becomes apparent that there is a huge difference between the art and the business. If you could, what one thing about the music scene would you personally change?

B.D: We’re just starting here, and for us, it’s getting to know the industry so we can actually have an opinion of our own. From my experience, maybe artists could genuinely support each other a bit more. We’re not really competing. Each one of us has such a different story and life to live. I’d like to see more representation of minorities, equal racial treatments and access to opportunities based on work ethic and talent — not skin colour, gender or general looks. The industry can do better in these areas.

O.S: Although it may sound oversimplified, ultimately we’d like our music to make a connection with people. If our tunes are making people feel things on any point in the emotional spectrum, whether that be through our recorded music or gigs, then we know we’re doing something right. Success to me looks like being able to continue to do that for as long as is humanly possible.

Breakdown the news for us: what can we expect from you in the near future?

B.D: We’re building a community around Goldrain — so we’re working to engage with people, fans and fellow musicians as much as possible. Expect collaborations, remix competitions and more original music to come, including lyrics and performance video. We have another single planned for release at the beginning of October as well. Also, PLEASE LET US GIG!!!