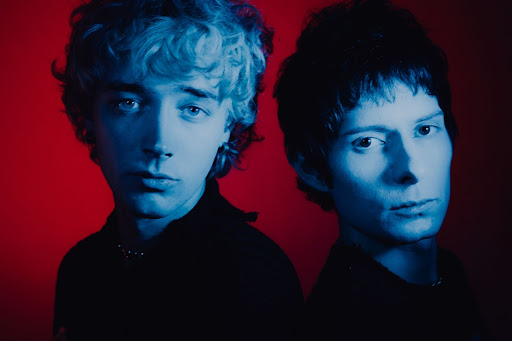 “We love being in the studio writing and recording. We enjoy the process that goes into making a record as much as the final product itself. We wanted to share that side of what we do with our fans and listeners. I’ve always enjoyed getting any insight into the process of how a record I love was made. The idea was to be able to offer our fans that same exciting feeling of giving a behind the scenes look into how we do what we do. I hope that it’s a special experience for our supporters.It’s always a strange feeling for me looking back at any older version of us. We learned a lot during the process of making MONSTERHOUSE. It’s nostalgic to watch it all back.”

“We knew this album was going to be a big undertaking and a turning point in direction stylistically. It felt really important to not leave everyone in the dark and bring people along for the experience. It’s great to see how it evolved from the early days to the end. A LOT morphed in the process of writing and recording. From album title and concept to all the songs being finalized in the moment. Knowing where this album landed in hindsight, it feels really special to watch many of those original moments happening in real time. We’re pulling back the curtain for the first time. We’ve always been very vague about our process and haven’t really allowed any cameras to follow us behind the scenes before this documentary. We wanted to give people an insight to how we do what we do, what it takes to do what we do and how seriously, or not, we approach making music. It’s a companion piece to an album that took every inch and resource we had to make possible.”

MONSTERHOUSE is the Los Angeles-based duo’s second full-length studio album, following their critically-acclaimed, self-titled debut released in 2017. The new LP is packed with high-energy, genre-fluid tracks that exhibit WARBLY JETS’ studio chops and production prowess. With sonic references ranging from Rick Rubin and Beck, to Beastie Boys and early 2000s hip-hop, the album explores the place where humanity and technology meet—grappling with all the questions and doubts that come with living in the information age.