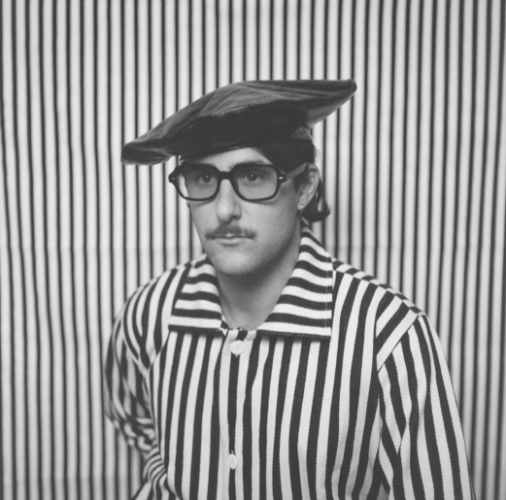 Continuing from the sonic style of first single ‘Two Of Us’ (praised by DIY, DORK, Rocksound, Brooklyn Vegan and more),  ‘Superstition’ is a swaggering, sexy confession of love punctuated with explosive bursts of vintage strings and funky rhythms that Farro’s smooth tenor vocals croon over the top of.

Motif, released via Zac’s own label Congrats Records is the soundtrack to a genuine, real life love affair. Inspired by his relationship with partner and collaborator Kayla Graninger, Motif charts the journey of new love…from infatuation to maturity, from New York to Los Angeles, from spontaneity to the everyday.

The story begins in medias res with the breezy, hand-holding, instrumental stroll fittingly titled, “Introduction.” From here, the record picks up with latest single, “Superstition,” setting the stage lyrically with the vulnerable, sincere adulations of a boy in love and way in over his head.

‘Motif’ unapologetically resides in the hi-fi mid-70s atmosphere of The Bee Gees, Gaye, Nilsson, Lennon and ELO, with swanky keys, nostalgic string arrangements, gushing sentiment and unrepentant saxophone — all without a hint of irony or parody.  Noticeably forefront are the melodies, which find Farro louder in the mix than usual, more exposed, and stretching his vocal and poetic range. Meanwhile Halfnoise moves into previously unexplored musical and emotional territory with both passionate and playful abandon.

The album closes strong with Last Day on Earth, a dreamy, Mind Games-esque anthem combining the whole cast of instrumental characters in a rapturous, romantic crescendo as the two lovers fantasize about their relationship in apocalyptic metaphor. The story’s final image is of the couple gracefully accepting a world that is unaware of its own impending demise and indifferent to the warnings of the new lovers, who alone, in the purification of love, can see the truth.

Halfnoise was founded by Farro in 2010, and has gone through many different musical iterations. Acclaimed 2016 album ‘Sudden Feeling’ drew from elements of shimmering synth-pop, which quickly developed into 2019s ‘Natural Disguise’ which combined alternative rock, with disco elements, and which has led to the next chapter, beginning with ‘Two Of Us’ & ‘Supersition’.

Not one to rest on their laurels, since rejoining Paramore in 2017 Farro has released two EPs & one album under the Halfnoise moniker, as well as setting up his own label (Congrats) and producing the recent debut record from fellow Nashville artist and partner ELKE.