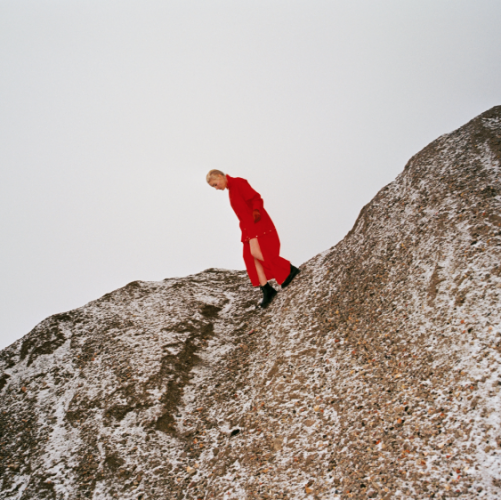 Cate Le Bon has shared the video for “Daylight Matters,” the first single from her forthcoming release, Reward, out May 24th on Mexican Summer. Pitchfork named the single “Best New Track,” it as “more Young Americans than Low, all glowing and swaggering and lovesick.” The video (launched on NME), directed by acclaimed film maker and multimedia artist Casey Raymond (John Grant,  DJ Shadow) against the solitude of the Welsh coastline, utilizes saturated hues of reds and pinks to accentuate the sense of expanse. As described by Le Bon, the video represents “playful solitary despair in an alien landscape of sinking sand and towers in the sea. Searching or running away? A little bit of both, maybe.”

It was on a mountainside in Cumbria that the first whispers of Cate Le Bon’s fifth studio album poked their buds above the earth. “There’s a strange romanticism to going a little bit crazy and playing the piano to yourself and singing into the night,” she says, recounting the year living solitarily in the Lakes District of the U.K which gave way to Reward. By day, ever the polymath, Le Bon painstakingly learnt to make solid wood tables, stools and chairs from scratch; by night she looked to a second-hand Meers — the first piano she had ever owned — for company, “windows closed to absolutely everyone”, and accidentally poured her heart out.

The multifaceted nature of Le Bon’s art — its ability to take on multiple meanings and hold motivations which are not immediately obvious — is evident right down to the album’s very name. “People hear the word ‘reward’ and they think that it’s a positive word” says Le Bon, “and to me it’s quite a sinister word in that it depends on the relationship between the giver and the receiver. I feel like it’s really indicative of the times we’re living in where words are used as slogans, and everything is slowly losing its meaning.” The record, then, signals a scrambling to hold onto meaning; it is a warning against lazy comparisons and face values. It is a sentiment nicely summed up through her woodwork: “Always keep your hand behind the chisel.”

Reward’s ten songs were conceived alone at a piano, which remains evident by the feeling of closeness that they convey. Although eventually recorded across America and the UK, and roping in a rollcall of trusted collaborators (including Stella Mozgawa of Warpaint, H.Hawkline and Samur Khouja as co-producer), Reward miraculously maintains its sense of privacy and intimacy throughout. This stems directly from Le Bon herself and the inimitable way in which she works, all of which preserves a signature sound despite relatively drastic changes in approach. The result is an album every bit as stylistically varied, surrealistically-inclined and tactile as those in the enduring outsider’s back catalogue, but one that is also intensely introspective and profound and significantly her most personal to date.

Cate Le Bon will be returning to the US for a tour this summer, including a previously announced appearance at Pitchfork Music Festival. All tour dates are below.