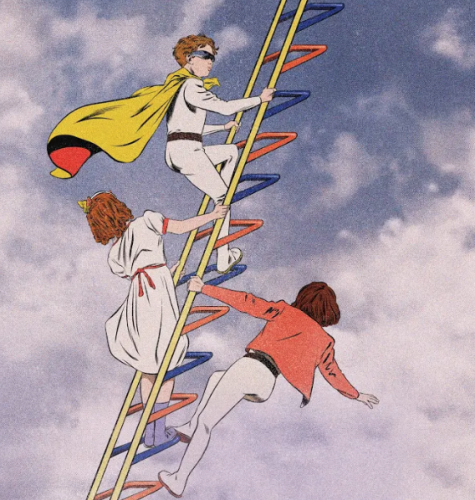 Paris based trio Oracle Sisters announce their biggest UK headline show to date at The Old Blue Last, London on July 17th in partnership with So Young Magazine. Tickets are on-sale now via DICE.

The band also share the video for ‘I Don’t Wanna Move’, which premiered via Under The Radar and is lifted from their EP ‘Paris II’. The group also sat down with V Magazine, to talk exclusively about their upcoming debut album – of which the first single will be released this summer via NY indie-label 22Twenty. Oracle Sisters’ members hail from across Europe and the UK , the band are uninhibited in their influences, finding inspiration within the art, cinema, philosophy, and music of the world over; resulting in a sound that is both sonically sophisticated and warmly familiar. Lyrically, they explore timeless narratives of love, mysticism and spirituality, scattered with intriguing insights into their own personal lives and experiences resulting in songs that are cryptic yet inviting. Now, having started recording in Greece,  the band are finishing off their debut album in Paris, due for announcement soon.

Along the road, they’ve also played impromptu shows on the island of Hydra with friends from Fontaines D.C & The Murder Capital   – capturing the troubadour spirit of the band. With well over three million streams across their modest catalogue, and an impressive schedule of live dates to be announced across the UK, Europe and US and a debut album on the way – Oracle Sisters are quickly becoming recognised as one of the most exciting and prolific outfits to emerge from the French music scene, and now set their sights further afield. Oracle Sisters are Lewis Lazar, Christopher Willatt and Julia Johansen. PARIS II TRACK LISTING:1. Honeymoon2. The Dandelion3. If I Was Yours4. La Ferme Song5. I Don’t Wanna Move.