INTERVIEW: We catch up with avant-pop songstress Fifi Rong 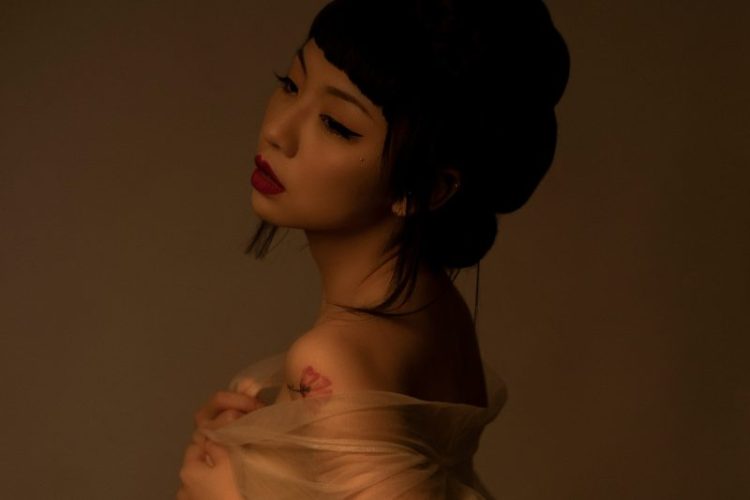 Now, if you’ve been following RCRD LBL for the past year, chances are you would have heard about the Chinese-British songstress Fifi Rong and her fantastical build towards releasing her latest crowd-funded album, There Is A Funeral In My Heart, For Every Man I Loved. The singer first arrived on our radar in February 2021 with the release of ‘Another Me’ and the artistic music video that accompanied it. In the nearly full year to follow, we saw Fifi Rong investigate the world of live performance, become a forerunner in the NFT community and launch the impressively successful crowd-funding campaign that helped her give back to her followers and collaborators alike.

It seemed only fitting to round off the year with Fifi Rong as we explore her mind, creative process and plans for the future. Find it all in the exclusive interview below.

I was 4 watching this TV show about pianists and I developed this aching desire toward it and begged my parents to get me a piano.

In your biog, you mentioned how you’ve struggled to reconcile the two different sides of society (Western and Eastern). Do you feel you were able to bring the two together in your latest album?

Yes absolutely. It’s effortless now, and I can dial to any side as I wish.

There Is A Funeral In My Heart, For Every Man I Loved was crowd-funded, reaching the goal before the campaign ended. Tell us how you feel about this success and what you envision the next step to be

I’m very proud and loved. We reached the goal 2 weeks before the end of the campaign and ended at 164% crossed Indiegogo and my website’s crowdfunding period. This is proof of the ‘1000 true fan’ theory of how modern artists can have true creative freedom and full support from a relatively small number of true supporters instead of millions of distant listeners/fans. Going forward, I will be taking my connection with my real supporters to web3, which is an environment where this culture I have developed in my community can really thrive.

What is your favourite aspect of your video for ‘Out Of Clock’? What makes it stand out from the rest?

I speak in Chinese and English in the monologue at the intro, and tell the story of Why There Is A Funeral In My Heart in Chinese on one of the stereo fields, whereas I kept repeating the Album title in the other stereo field. It sums up the album really, and the production style is my favourite type in all my productions too: ‘passive aggressive’. Also, the chorus really spells out the general emotional signature of the entire album. ‘My heart is running out of love, for anyone, to stay’… after every funeral I gave to every single love affair. It’s a memoir of love after all.

The world of NFTs is quickly evolving, with you as one of the forerunners in the community. Tell us why you believe this new digital world is so important?

Cryptocurrency and NFT is a new technology, a disruptive one. Technology is a one way street, and NFT as a technology will take over the whole world before everyone realises it. It creates a better, fairer world and financial system, a win-win situation for creators, fans, and collectors, and adds much more utility and ownership to the relations between them.

Metaverse is the immediate future that will integrate with most of our lives and NFT is the builder block of this meta universe we are moving into.

Where is a good starting point for an artist looking to enter the NFT game? What tips would you give to a newcomer?

Web3 is powered by people and communities and the key is self governance, so education and connection with others in the community is the first and foremost aspect of longevity in NFT. So I’d recommend finding us on twitter, we have community space to educate and connect all the time around the week/cock. My twitter is @fifirong so follow me and connect on my daily onboarding show and I’ll set them up.

Tell us about your latest album. Which track shouldn’t fans sleep on and why?

‘I’m Enough’ has been talked about a lot from the feedback so far. I didn’t expect that, as I didn’t get special ‘love’ earlier during the making of the album from my peers, so I was sleeping on it. But now the album is out, people are loving it, and felt that it should have been a single as well. But then, the traditional industry may think there’s no single in my album, whereas my true supporters think every song is a single. Guess whose view I care more about?:)

One last thought to leave with your fans?

I love loving you