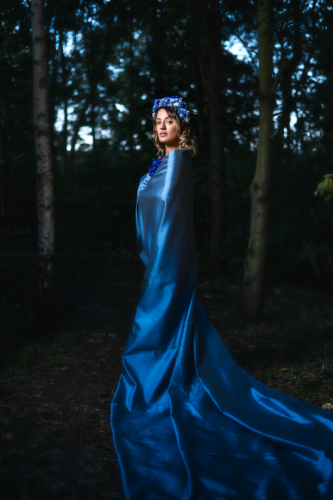 London based singer-songwriter Lisabel has released her debut album, A Work Of Art on May 5th. The album was recorded, produced, mixed, and mastered at Brother Sun Sister Moon Productions Studio by Nikola Kovačević. Thus far, she has been supported by the likes of Le Future Wave, comeherefloyd, Talk About Pop Music. Lisabel has received airplay from Pheonix FM’s Bob Simpson, resulting in close to 36 000 plays across streaming platforms. The songstress has played in renowned London music venues such as The Half Moon, Pizza Express Jazz Club (Soho and Chelsea), O2 Academy Islington to name a few.

Lisabel shares her thoughts on the album, “A Work of Art is a collection of songs that all share the theme of love from various points of view, often using metaphors to refer to a lover. A work of art is commonly portrayed as an object/creation of beauty, inside of which we can lose ourselves due to an overwhelming feeling that we can’t quite point out. In Lisabel’s mind, ‘A Work of Art’ is a person who she believes to be a symbol of joy, kindness, and love, an imperfect soul whose purity is unmistakable and undeniable. The album unfolds in a chronological order which follows personal events that have inspired Lisabel to write the songs. Starting from ‘Salamander Souls’ and ending with ‘Dear Moon’, each song represents a feeling and a moment in which Lisabel experienced a positive revelation about the beauty of life, people, love, and nature.

Lisabel takes you on a journey of romance, joy, and life in her debut. Her graceful vocals shine throughout the album, which is a well-integrated and wholesome work of art.