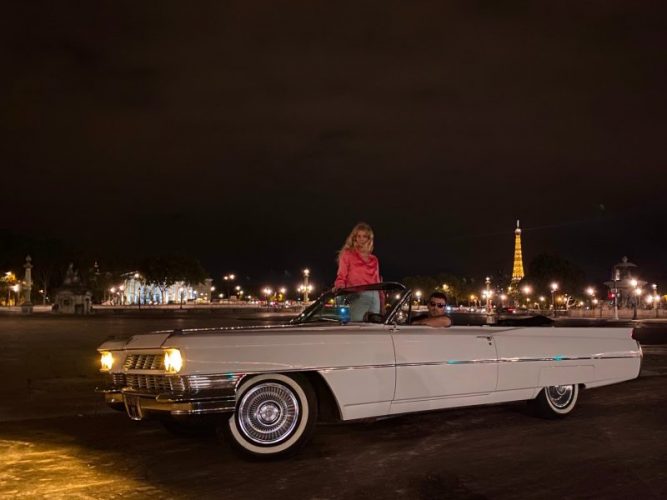 Today, music producer and composer HELMAUD has released single ‘Hey Boi’ ft. DIXIE along with an official music video for the single, featuring fiery songstress DIXIE and of course the man himself. Filmed with a DIY approach, the video captures the pair taking a night drive in the iconic city of Paris, where HELMAUD is from.

Previously interviewed by Muze FM, the music producer commented on his relationship with collaborator DIXIE, “The two neighbours initially met in Thai boxing classes in 2015 (have been doing boxing for 8 years now). They would both come and spar with good energy and an open mind, but DIXIE and HELMAUD only truly started sympathizing in spring 2019, as DIXIE learned HELMAUD was a pianist. DIXIE has a wonderful 1920 Pleyel Piano in her flat, rue St Denis, 75002, so I drop by many times just to jam. And she did the same, coming over randomly while down my block. Hitting me up asking if I’m around, and dropped by for a fast jam, and a lot of white wine… Man, I can’t follow up with her drinking.. she’s way too trained. As HELMAUD’s jazz-infused technique started attracting DIXIE, the two yet-to-be friends very quickly became inseparable. Music, and especially jamming had forged a very strong bond for the two, DIXIE, discovering her attraction for singing and composition, and HELMAUD, finding very much satisfaction through DIXIE’s soul heritage and care-free energy. Hedonism, stoicism, philosophy, friendship, and the ups and downs of relationships have forged their urge to doing music together.”

Talking about the video concept, HELMAUD adds, “After many unsatisfying cuts based on another story from a former director, I decided to change totally and go for a real DIY video. A variation on an old hip hop famous theme: the whip ride – a tribute to American hip hop iconography. We thought this 1964 Cadillac riding along contemporary Paris would fit the soul vibe on the modern beat and attitude of this song. Knowing that Dixie is half American (New Orleans) & I’m a full Parisian, it made sense. No one was in town or available for the last-minute deadline. Then comes Isabel Deprice, an old friend of mine, (who featured in my previous music video “I Know Your Game”, shot by Ryan Doubiago). In the end, it was shot in 2 hours with an Iphone & edited with an Ipad.”