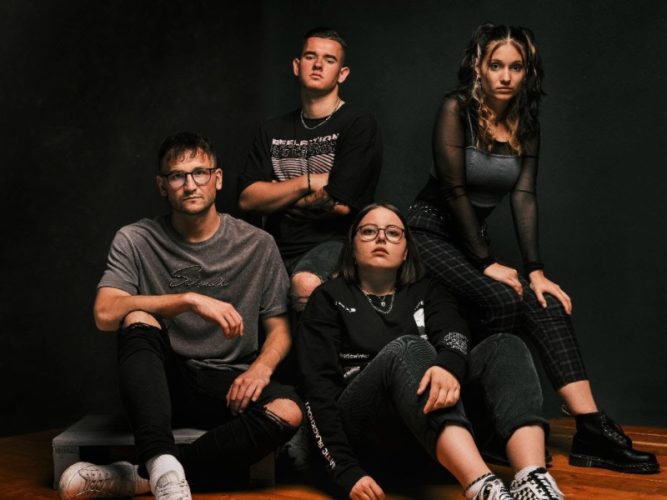 Pre-order Fire In Me here: https://hasslerecords.ffm.to/lsh_fire-in-me

celebration of the news, Letters Sent Home has also announced its debut UK live performance: the group will be supporting alt-rockers Blackout Problems at London’s Black Heart on 16th November.

The band comment: ““Fire” is a perfect introduction into that new mindset as it portrays a world full of hatred which can only be saved through love – the love we feel and especially give. “The fire in me is burning me to the ground”, meaning only love will be the end of me. I will not die with hatred in my heart.”

Fire In Me will be available as a limited vinyl release of 200 copies, pressed on crystal clear vinyl and handnumbered and signed by the band. Available exclusively from the Hassle Records store, the physical EP features new versions of Letters Sent Home‘s hit ‘Misery Loves Company, including a stripped-back version.

Letters Sent Home was formed in 2017 in Wolfsburg, based on the close bonds of friendship of Emily, Lara and Robin, quickly finding a fourth member in drummer Louis. The band began their journey fully in 2020 with their first single ‘Mosaic Mirror’ – and the process that the band have lived through can be described as a rollercoaster, full of highs and lows.

Driven by courageous ambition, Letters Sent Home came closer to their goals with their first, self-titled EP in late 2020, which served as the foundation for an incredibly successful 2021.

The Misery Loves Company EP led to national attention across key alternative media outlets and an ever-growing fanbase, as well as Hassle Records, their new label home for the third EP Fire In Me. A stunning listen, it’s a fine demonstration of Letters Sent Home‘s non-conforming rock sound and its strong lyrical identity.

Thematically the band touch on the topic of mental health, and vocalist Emily’s personal experiences. The band raise awareness on these themes not just through their music but with initiatives such as their Helpless But Hopeful Festivals and accompanying podcast.

Having now signed with established London-based independent label Hassle Records, Letters Sent Home look set to establish themselves as one of the most promising acts to watch out for over the coming year – new EP Fire In Me coming December 2022, with the quartet already working on crafting their debut album.