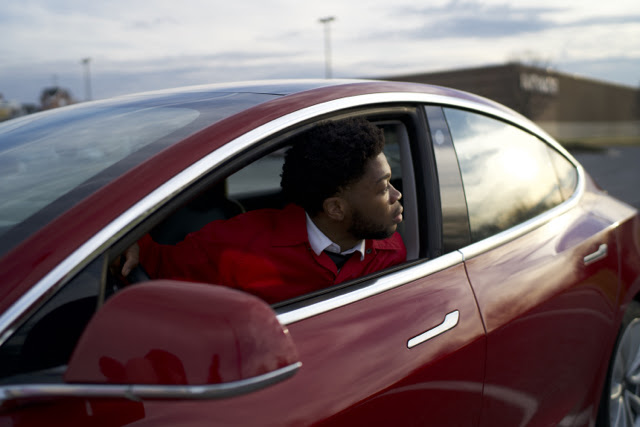 Rising Maryland born artist Lil Seyi is pleased to announce a brand new release with the arrival of ‘AC Press’, lifted from the new EP ‘A Blue Tesla Story’ due this summer through Kitsuné Musique.

After the release of several singles and a wonderful ‘Remixes EP’, Lil Seyi has worked hard to come back with a project that lives up to his artistic ambitions. ‘A Blue Tesla Story’ is more than just four songs, it is a whole story, which must be listened to in its entirety, composed and performed by a young man whose trajectory is on the rise.

Seyi, who has always been fascinated by golden-era hip-hop and offers an EP that combines the classic codes of the genre with his personal influences. Channeling the strong political messaging of groups like N.W.A and Public Enemy and the current social commentary of peers like Kendrick Lamar. The diversity and originality of his compositions remind us of Kanye West’s achievements, while the structure of the project and the way of linking the tracks remind us of Frank Ocean‘s creations.

Seyi explains: “The nameless main character in a A Blue Tesla Story isn’t perfect, far from it actually. The EP even opens up with him going on a joyride, rear ending a car and driving away from the scene (hit and run). This decision leads to a series of events that end in the tragic passing away of his brother at the hands of the highway patrol. The EP continues as we follow the life of this main character as he deals with the public eye of this very public trial seeking justice for his brother. We see him getting support from protestors, but we also see him under heavy scrutiny as his involvement with credit card scamming surfaces. In the end, we find him left with nothing at all as time passes by and neither the supporters nor critics seemed to care about him or his late brother anymore.”

He goes on to add: “As human beings, we tend to reduce each other to our worst moments, because it’s a lot easier to point out the evil in others than realizing the brokenness within ourselves. What I hope to communicate in this story, is that defining yourself based on what this world tells you about yourself will only ever leave you empty. Because everything in this world will fail you at some point, your family, friends, spouse, church, teachers and even you will fail you. But the good news is that our creator who exists outside of this world defines us with love. God. Whom by definition is the embodiment of goodness and can therefore never fail us.”

Seyi worked hard to take on the responsibilities that come with being an artist. Now he’s back with ‘A Blue Tesla Story’, an EP where thoughtful storytelling honours the wonderful music Seyi has composed for this new project.