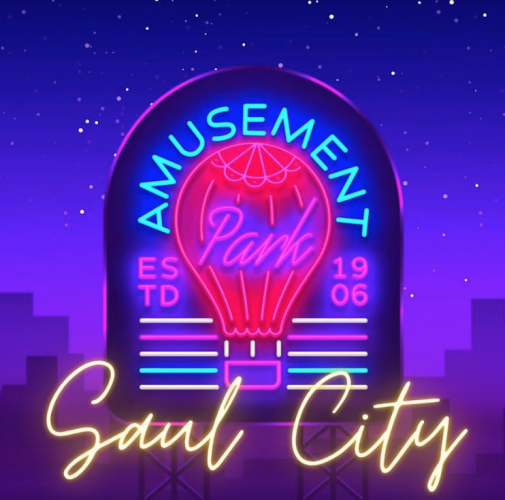 As Saul City celebrate 10 years of marriage and 12 years of their musical journey together. To celebrate, the couple releases their new track ‘Amusement Park’. In a world shaken by a pandemic and lockdown, the pair use their time to sympathise and express relatable emotion through music during these trying times.

Kicking off with singer/songwriter, Lauren writing and performing on the track ‘Disco Venture’, a collaboration with Los Angeles based artist Mr. Moustache and a piece Saul City listeners couldn’t stop moving to. But it was their feature on rising producer Jason Giger’s ‘Leaving and Losing’ that gave them their light bulb moment, leaving a welcomed dent in their musical steps forward, a dent that invited perspective. With features on blogs, a spot on Apple Music Africa and a number one position on Chapter One Radios Top 10. The duo who’d once refer to themselves as genreless have found a musical path, putting their twist on R&B and Nu Soul sounds. Guitarist Michele felt the deep and warm sounds of his wife’s voice would be a great branding strategy which lead to the birth of ‘Amusement Park’.

Michele sat playing the ever-present guitar riff adamant to have a repetitive sound that stuck, he introduced it to Lauren who already had the lyrics to ‘Amusement Park’.

Searching through her bank of voice notes, she found the melody for what would shape ‘Amusement Park’. The song designed to soothe yet move, and the lyrics are carefully written to relate and become an anthem.

“You could say it’s a song about love gone wrong, but there are people and situations in your life that are toxic whether or not exists in it. I want the chorus to be a singalong of confidence and sass to all those toxic people who think it’s okay to use you.” says the singer.

Saul City are excited to share ‘Amusement Park’, with an exciting project coming up, the genreless duo who seem to have found their path are still looking forward to straying and experimenting.