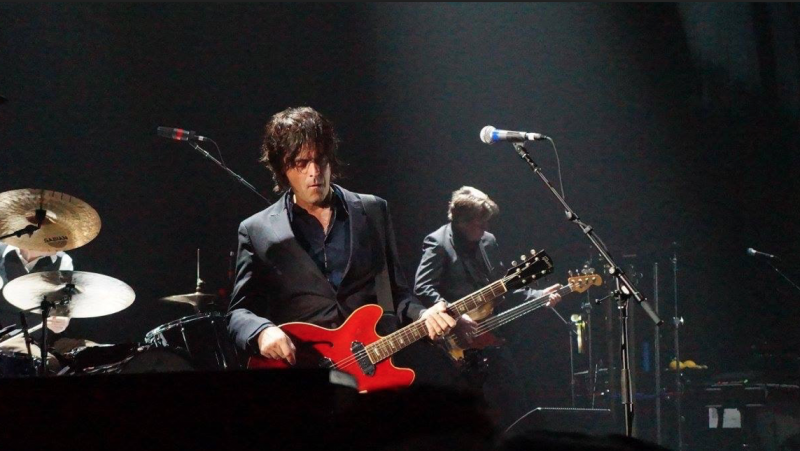 When not performing with the Bad Seeds, George Vjestica is the driving force behind Bandante, a moveable feast of a band, recording and performing George’s music for which other musicians, artists and film makers, are brought in to contribute.  It is the experimental nature of Bandante and in particular his work with Tim – the overlapping of lenses through a collaborative process – that allows George to develop new, interesting and unexpected creative dynamics and outcomes.

So This Is Now is the latest offering from Bandante where music and imagery are seamlessly combined in a video piece made by the artist, Timothy Shepard.

Work on So This Is Now  began at Vale Studios with the recording of an instrumental piece written by George. Joining him were musicians, Ian Matthews (Kasabian) on drums, Nikolaj Torp (The Specials) on Hammond and Mellotron, and Tim Hutton (Dub Pistols, Prodigy) on horns.  From this session came an intense 5-minute blast of killer riff-driven music, inspired by 60’s American psychedelia, Arthur Lee’s ‘Love’ and the Haight-Ashbury/Monterey scene – a soundtrack that George had always imagined being set to film.

“I wanted the chorus to feel like a call to arms, to hear a cacophonous fanfare of blaring trumpets – a massive release, with a verse I wrote to be full of tension and suspense.” George explains.

Timothy Shepard is an American contemporary fine artist based in London who uses collage (in a very broad sense of the term) working in 2d, film making and music composition. He has been a regular collaborator with Bandante, creating videos for Bang Bang/My Friend as well as super 8 films projected at Bandante’s immersive shows. He has previously worked with other musicians including Paul Weller (a series of country walks which resulted in the cover for 22 Dreams), the quite possibly deceased enigmatic film maker CS Leigh, and a very close collaboration with Kevin Ayers on the making of his swan song album The Unfairground.

George continues the story. “After the Vale Studio sessions, I got very busy with the Bad Seeds whilst the track I had recorded kind of went in the drawer. One morning in mid-June, during lockdown, while going through some playlists on my laptop, I found a file labelled, ‘Protest/Revolt into Style/Vale Studio‘. I put it on and was blown away. It sounded and felt like what was going on outside at the time when it seemed that an unstoppable momentum was building for a summer of protest.”

“I’ve known Tim for a while – he lives up the road from me in Notting Hill and we’d often meet for a coffee. Our conversations always ended up trying to figure out what the fuck was going on around all the talk of Trump, Brexit and the rest of it. This continued during lockdown over the phone. I asked Tim if he would make a short film set to this piece of music I’d recorded in Vale Studios, “it’s all the stuff we’ve been talking about.” I said.  He chewed on it, I heard him draw hard on his E cigarette, pause and say to me in his laconic Bostonian drawl, ‘Let’s see’.”

“He came back with what was, to me, a stunning piece of art. The music had the soul and the film, a ‘visual lyric’, had the mind and the conscience. It’s a hopeful, sad yet defiant, audio/visual collaboration that, in some visceral way, reflects the times we are living in right now.”

For the project, Tim made a film comprised of hundreds of sequenced cut-up and collaged images, in which we are shown a world through a dystopic like window of now, teetering on collapse and chaos with a message of only-hope that,  “the power of the people is greater than the people in power”.

“We are at a moment of choice,” Tim explains. “George and I would talk about this a lot, and in great part the collaborative process with George and what informed the making of the film were these conversations – about how this point in human history is so pivotal –  when we either have global social, economic, and climate collapse or we don’t.”

Tim continues: “It is by no means impossible that we can achieve an understanding whereby we can live sustainably and flourish. There is this idea of decentralizing the power which is very interesting – whether it’s the media or politicians or whatever force that is enacted in order for us to behave in a certain way or impart some ‘truth’  – and in place of all that we could bring about a more collaborative sense making approach. We’ve all “had enough of reading things by neurotic-psychotic pig-headed politicians”.

“To get ourselves to a good place we’ve got to take an honest and positive look at ourselves – realise and empower ourselves. But because we’re all guilty of something, if not the same faults we point out in others. Change must start with ourselves and be enacted upon even more urgently than the call for others to change.”

So This Is Now is currently available to watch on YouTube –  it’s something that’s just out there.

Meanwhile during Lockdown George has been busy in his studio, there are plans with Tim for a sound and vision installation and whilst touring and performing remain on hold we can expect the two of them to bring a whole bunch more of overlapping lenses.