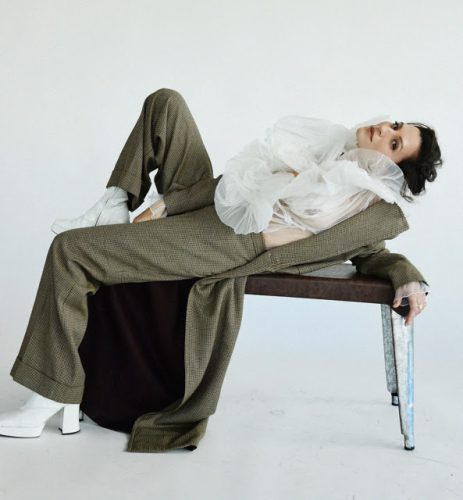 Discussing the new single, Dragonette (the professional moniker for highly sought-after songwriter Martina Sorbara) notes, “This song is about the push and pull of progress versus nostalgia, which is present in the instrumentation as well: a house track with an acoustic drum solo! Everyone has a point that they let go of the new world, hold on to what is familiar and let progress carry on without them. I think about that a lot. I have a lot of nostalgia for earlier times, life without the crazy frantic energy of what the digital/social media age has wrought. But I also have a genuine excitement about current and future knowledge/progress/technical and scientific discoveries. ‘Twennies’ is the internal collision of those two polarities.”

On Twennies, Dragonette chose to work with one creative partner for the entire project—the Los Angeles-based producer Dan Farber (Dizzee Rascal, Lizzo). The two spent several weeks together holed up in Sorbara’s Toronto studio, where they wrote the majority of the record. “I’ve never concentrated on working on an album like that; just living and breathing this one thing,” she shares.

Twennies marks a full-circle moment for Dragonette; “It’s a true hybrid of my original influences as a child and what I’ve learned along the way. It feels so representative of my musical journey.” She adds, “It’s my favorite thing I’ve ever done. I’m so proud of it.”

With a career spanning over fifteen years, Dragonette has scored numerous global hits including “Pick Up the Phone,” “Let it Go,” “Tokyo Nights” with Digital Farm Animals and Shaun Frank, “Outlines” with Mike Mago, “Slow Song” with The Knocks, and the chart-topping “Hello” with Martin Solveig, which garnered a JUNO Award win for ‘Dance Recording of the Year’ and returned to the Billboard Dance Charts just last year. Collaborating with the world’s biggest DJs including Martin Garrix, Basement Jaxx, Kaskade, Galantis, and more, Dragonette’s musical diversity knows no bounds, and as a songwriter, her credits include Keith Urban, Cyndi Lauper, Pretty Sister, and Carly Rae Jepsen, among others.

Creative versatility shines across Dragonette’s four acclaimed studio albums, including Galore (2007), which earned Dragonette a JUNO nomination for ‘Breakthrough Group of the Year’, the JUNO-nominated Fixin To Thrill (2009), the JUNO-nominated Bodyparts (2012), and 2016’s Royal Blues. With global headlining credits too numerous to list, Dragonette has also supported the likes of Duran Duran, New Order, Ke$ha, and Miike Snow, and amassed major festival credits, playing to thousands of fans at Coachella, Electric Daisy Carnival, Glastonbury, and Lollapalooza.

With Twennies Dragonette moves into the newest chapter of her illustrious career, looking forward with more wisdom, experience and confidence than ever before, and creating her best work to date.